“I’m not your servant!” retorted my daughter once, when asked to complete a chore. She was about five at the time. I responded, “That’s right, you’re not, and neither am I yours. But we both have to serve each other.”

Turning towards the picture of Jesus in our living room, I asked her to think of His final hours as a free man. Of the things He chose to do in that precious time. In just a few days, those vital activities will be commemorated in churches worldwide, as they are each year during Holy Week, by Christians everywhere, including every member of my family. Except my grandmother Mercy, who is now virtually bedridden and trapped in her flat.

I prodded my daughter to recall one particular activity, where Jesus stoops down and washes the feet of each of his twelve disciples. Please read about the Washing of the Feet to understand the significance of this event, which is reverentially re-enacted each year. Right from the Pope, priests everywhere who lead the Holy Thursday solemnity, wash the feet of twelve members of the congregation.

Again, why? As Jesus himself said: 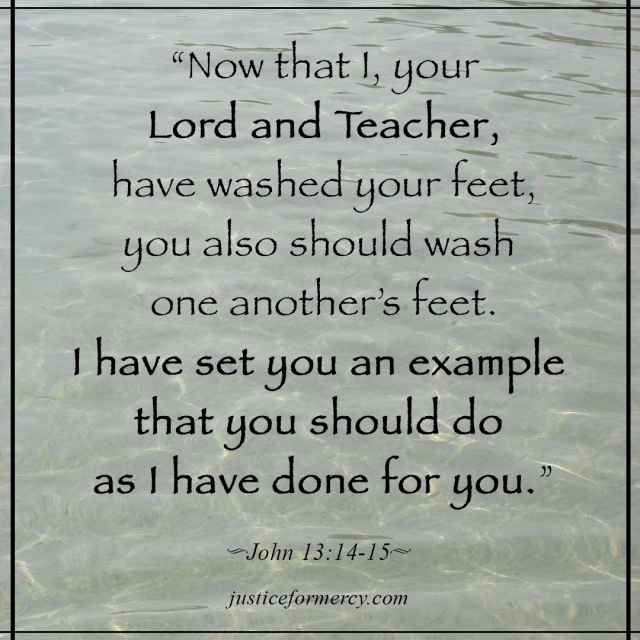 As I reminded my daughter of Jesus’s words, I could see realisation dawn in her oh-so-young eyes, followed by a sheepish grin. If the man we worship as our Lord and Teacher could humble Himself to serve like the lowliest servant, what justification can any follower have to defy His call for us to do the same?

Yet, this defiance runs rampant in my family. On the surface, all are regular churchgoing Catholic Christians. Many are particular about the strict observance of rituals, with the counsellor matriarch of Family A prominent in the forefront of Holy Week prayer services. Most of them eagerly pursue avenues to display piety in public, because that gets noticed and admired. But how many humble themselves for the mundane but life-sustaining tasks which nobody sees?

This blog’s very existence is rooted in the fact that, barring my parents and the late Son 1, none of Mercy’s other children or their spouses have the humility to serve, as Jesus served. They’re skilled at putting on a convincing external show of faith, but internally their hearts remain unmoved and unchanged by His message.

Mercy was never the stereotypical Indian mother-in-law, who expected to be waited on hand and foot. A humble and hardworking lady, she lovingly bestowed her warmth and care on all her family whenever they visited. And when it was her turn to visit her sons’ homes in America, she went eager to lend a helping hand.

However, she was cruelly rebuffed by both daughters-in-law, for no fault of hers. Made to feel unloved and useless, she began retreating into a shell that is now a decade-old, and one she cannot break free of.

I know so many women today, who have difficult relationships with their parents-in-law. But no matter how trying the relationship becomes, these women never forget one fact: that these elders are after all, their husbands’ parents. Because they love their husbands, they make the effort to get along with the parents.

Mercy had treated both DIL 1 and DIL 2 like her own children. But they never considered her as a mother, they only focused on the ‘in-law’ part. To their own families and the people whose friendship is beneficial to them, they are models of sharing and caring.

Sadly, Mercy was never a treasured member of their family, but an unwanted burden. Someone to be tolerated, but never loved. Someone to be shunted out of their homes as soon as possible, so she’d become anybody else’s responsibility but theirs. Even Mercy’s own youngest child, Daughter 2, is the type whose unpredictable affection is displayed only monetarily through lavish spending.

What of the small, daily acts of kindness which cost nothing, except humility and service, as modelled by Jesus? That is a price too high for them all.